Skip to content
To find God you must first kiss a frog!

To find God you must first kiss a frog!

Many familiar fairy tales are about a kundalini-awakening. That is remarkable because these recorded folk tales stem from a time at which this Eastern concept had not yet entered the Western collective consciousness. But even though nowadays the kundalini has become part of spiritual jargon, particularly because of an increased interest in yoga, this mysterious source of energy is still largely regarded as something exotic and pertaining to the ascetic yogi who performs complicated exercises (kriyas) in order to awaken this serpentine force in his pelvis.

Who develops an eye for it will begin to see that the holy writings and iconography of virtually all religions and spiritual traditions contain references – usually cryptic – to a divine fire in our pelvis (near the “sacrum,” or sacred bone!). These clues that were left by initiated and mystics add up to the message that at our incarnation into the material world we were given a divine pilot light, which can lead a person to a next step in the evolution, when brought to ignition; a possibility to the broadening of our consciousness that exceeds our imaginations, a potential of immortality.

Special exercises are generally not required to awaken the kundalini. Much more important is a pure lifestyle and a sincere desire for God. And a willingness to face whatever is stored in the subconscious. This latter is what the familiar story of the frog prince discusses.

The story begins with a princess who drops her golden ball into the water:

In the vicinity of the king’s castle there was a large, dark forest, and in this forest, beneath an old linden tree, there was a well. In the heat of the day the princess would go out into the forest and sit on the edge of the cool well. To pass the time she would take a golden ball, throw it into the air, and then catch it. It was her favorite plaything. Now one day it happened that the princess’s golden ball did not fall into her hands, that she held up high, but instead it fell to the ground and rolled right into the water. 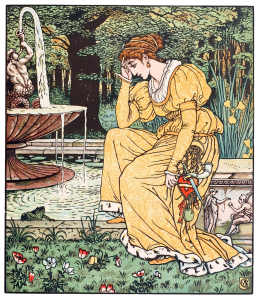 All elements of this fragment point toward kundalini-energy. The tree is the quintessential symbol for the spinal column through which the awakened kundalini flows up to the crown. The water well beneath the tree represents the divine energy itself. The golden ball which the king’s daughter throws in the air near the well depicts the rising motion of the kundalini. Both the circular form and the gold of the ball refer to the divine.

The princess drops the ball and it disappears beneath the water; the kundalini-energy withdraws into the pelvis. She cries bitter tears and is inconsolable. Then from the water emerges a frog, which offers to help her. But he wants something in return:

The frog answered, “I do not want your clothes, your pearls and precious stones, nor your golden crown, but if you will love me and accept me as a companion and playmate, and let me sit next to you at your table and eat from your golden plate and drink from your cup and sleep in your bed, if you will promise this to me, then I’ll dive down and bring your golden ball back to you.” “Oh, yes,” she said, “I promise all of that to you if you will just bring the ball back to me.” 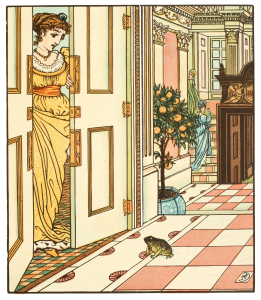 The princess, however, does not keep her promise. When she has her ball back she abandons the frog at the well. The next day he knocks on the door of the palace but the princess won’t let him in. When the king learns what has happened he instructs his daughter to keep her promise. Reluctantly she opens the door for the frog.

The animalistic within a human being

The frog represents all the qualities, proclivities and urges that we prefer to deny we have. Commonly these are aspects of our animalistic nature; think of aggression, jealousy, greed, lust and egoism. An often reoccurring central theme of all writing on the kundalini-mystery is the victory over animalistic instincts and the rerouting of these energies toward the realization of our divine potential. 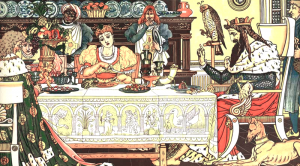 One of the pitfalls on the spiritual path is to deny or suppress urges which don’t match the ideal image we have of someone who is holy or enlightened. These energies of our “lower” or earthly nature, when purified and sublimated, can actually help us realize the higher. Better yet: without these primal forces the gates of the Kingdom of God remain closed. That is what this story wants to show us.

The frog which rises from the water (the subconscious) symbolizes the emerging awareness of these “shadowy” aspects. But awareness alone is not enough. The frog wants to be a playmate to the princess and wants her to love him, or else she won’t get her golden ball back. If we want to find God we must embrace and love our own “unattractive” aspects. The frog also wants to eat from the princess’ plate and sleep in her bed. These are images of integration; the lower nature must be absorbed into the energy of the complete person. 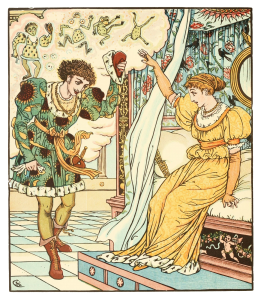 She picked him up with two fingers, carried him upstairs, and set him in a corner. As she was lying in bed, he came creeping up to her and said, “I am tired, and I want to sleep as well as you do. Pick me up or I’ll tell your father.”

With that she became bitterly angry and threw him against the wall with all her might. “Now you will have your peace, you disgusting frog!”

But when he fell down, he was not a frog, but a prince with beautiful friendly eyes. And he was now, according to her father’s will, her dear companion and husband. He told her how he had been enchanted by a wicked witch, and that she alone could have rescued him from the well, and that tomorrow they would go together to his kingdom.

Once (integrated) in(to) in the bedroom, the frog changes into an attractive prince, with whom the princess subsequently marries. The marriage represents the unification of the human person with God – the so-called “sacred marriage” – during which the masculine (the prince) and the feminine (the princess) unite within a person.

In the original version of this tale the princess throws the frog against the wall. This was in later versions amended to a more animal-friendly alternative: the princess kisses the frog.

The awakening of the heart

Then follows a beautiful and meaningful finale:

The next morning, just as the sun was waking them, a carriage pulled up, drawn by eight horses. They had white ostrich feathers on their heads and were outfitted with chains of gold. At the rear stood the young king’s servant, faithful Heinrich. Faithful Heinrich had been so saddened by his master’s transformation into a frog that he had had to place three iron bands around his heart to keep it from bursting in grief and sorrow. The carriage was to take the king back to his kingdom. Faithful Heinrich lifted them both inside and took his place at the rear. He was filled with joy over the redemption. After they had gone a short distance, the prince heard a crack from behind, as though something had broken. He turned around and said, “Heinrich, the carriage is breaking apart.” 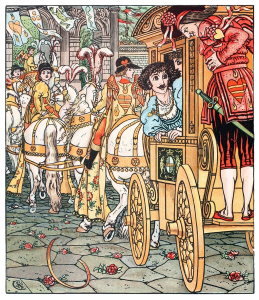 “No, my lord, the carriage it’s not,
But one of the bands surrounding my heart,
That suffered such great pain,
When you were sitting in the well,
When you were a frog.”

Once again, and then once again the prince heard a cracking sound and thought that the carriage was breaking apart, but it was the bands springing from faithful Heinrich’s heart because his master was now redeemed and happy.

The white horses which bring the lovers to the kingdom of the prince (i.e. God) represent the purified (white) animalistic energies. The ostrich feathers on their heads have the same meaning as the wings of the mythical horse Pegasus: the sublimation (spiritualization) of the earthly. The gold chains with which the horses are hitched refer to the divine.

The driver of the carriage, the faithful Heinrich, refers to the person in whom this transformation takes place. The breaking of the three iron bands around his heart symbolizes the full (three) opening of the heart chakra, when the unification with God takes place. The person is released from his earthly constrictions. A tremendous bliss flows through his being. The spell of the witch (the illusion of the Maya) is broken. 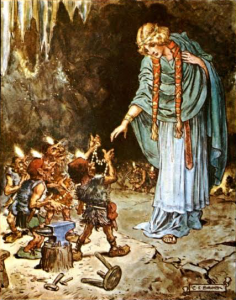 This fairy tale has clear roots in Norwegian mythology. The linden tree (by the well) from the story has a sacred status in the Celtic and Germanic tradition. The mother-goddess Freya (hence our word “Friday”) was thought to live in this tree. Like many mother-goddesses from other traditions (Kali, Vajrayogini, Aphrodite, Isis, Inanna), Freya personifies the kundalini-energy. She represents the feminine aspect of the one God, living in the spinal column (the linden tree) of a human being.

What doubtlessly played a role in selecting the linden tree is that the seeds of this tree come with an elongated wing that causes them to spin on their way down. It’s the same kind of motion that the kundalini makes on its way up along the spinal column.

According to the myths, Freya wanted at all cost to own a special chain named Brísingamen. To get this chain she had to sleep with four hideous dwarfs who created it. This story line is similar to that of the princess who has to share her bed with a filthy frog.
The four dwarfs too symbolize our earthly (lower) nature: in Norse mythology four dwarfs with the names North, South, East and West, stand on the four corners of the world to support the heavenly ceiling. The precious chain depicts the seven chakras through which the kundalini flows and which the kundalini-energy activates. It’s a beautiful metaphor for a kundalini-awakening!

In the fairy tale the royal carriage is drawn by eight horses. In Norse mythology, the prominent deity Odin moves about on an eight-legged horse named Sleipnir. The eight legs symbolize de merger of two forces (horses): of the masculine energies and the feminine energies into one (kundalini-)superforce.

The fairy tale of the frog prince aims to demonstrate that the way to God is not a matter of transcending the earthly, but cuts straight through the mire of our human nature. Pseudo-holiness is a big pitfall on this way! 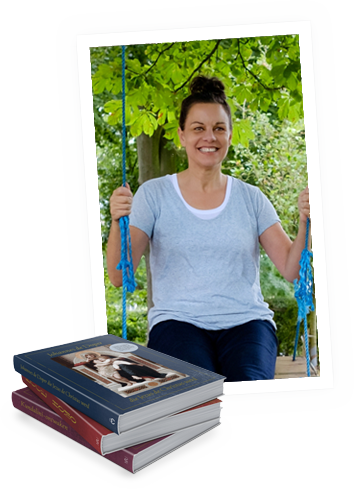